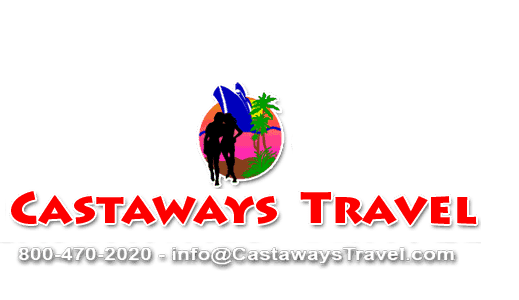 We (Donna Daniels and Jim Bailey, owners of Castaways Travel in Houston) first conceived a clothing optional resort takeover in Mexico (plus a nude flight to Mexico) several years ago. For a number of years, we pursued resorts in Mexico as well as charter airlines world-wide soliciting bidders.

We kept getting turned down....like we had rocks in our heads.

As luck would have it, during a site inspection tour in Mexico we found a property south of Cancun in 1998 that seemed to fit our needs: El Dorado Resort with 175 luxury guest rooms and suites with great security, a tropical beachfront location, an adults-only, all-inclusive meal/drink plan. We pursued the owners of El Dorado about a resort buy out for a week. Being somewhat reluctant, the owners did study our proposal and maintained a dialogue with us. Then, in 2002, a property management company, Karisma Hotels of Miami, Florida, was hired by the resort owners to market and operate their properties.

During July 2002, we contacted Karisma with a proposal for a week's buy out of the resort for Castaways' first clothing-optional week in Mexico. Eventually, two appointments were scheduled the same day - August 16, 2002, in Miami; one with Karisma and the other with a charter airline in Miami that was willing to listen to us without throwing us out of their office. After five years of planning, begging and pleading, within a matter of hours, we struck both deals with a handshake and simple contracts in back-to-back meetings that launched the historic events at the resort in Mexico and the world's first clothing-optional flight: www.Naked-air.com

The flight was actually conceived to help publicize Mexico's entry into this new niche market for clothing-optional vacations. But, due to intense media interest, the flight seemed to take on an identity of its own after the Miami Herald interviewed us and then ran a front-page article in January 2003. The story was picked up by international news wire services, television stations and broadcast worldwide during the latter half of January. The weekend after the story went viral worldwide, Castaways' website received 1.6 million hits in a matter of hours.

Leading up to Castaways first clothing-optional week at El Dorado Resort and Castaways' first commercial nude charter flight May 2003, management at Karisma plus El Dorado's owners studied our market niche and scheduled numerous meetings with us to plan the operations of an adults-only, all-inclusive, clothing-optional resort adjacent to the existing El Dorado Resort. Out of these brainstorming sessions (and a big financial commitment by El Dorado and Karisma), the owners and management launched the industry's first-ever five-star clothing-optional property in Mexico - Hidden Beach. By converting and upgrading two hotel guest buildings on the north side of El Dorado's existing property, Hidden Beach Resort with 42 oceanfront suites plus a Presidential Suite opened just in time for Castaways' first clothing optional resort takeover week, May 3-10, 2003.

After years of planning, we launched the first-ever clothing-optional week in Mexico and inaugurated the opening of Hidden Beach, May 3, 2003, as well as flew history's first commercial nude charter flight between Miami and Cancun. Now, every year in May since 2003, Castaways sponsors a week-long hosted anniversary trip to celebrate the birthday of Hidden Beach Resort, the finest 5-star, upscale clothing optional resort in the world.